Plumtree has long valued cultural diversity. We set out to engage with Aboriginal and Torres Strait Islander communities a decade ago. Currently, 7% of the families we work with are from an Indigenous background and our projects with the Aboriginal community aim to further increase participation.

In acknowledging and respecting Indigenous culture, we wanted a welcoming environment for the families. Since 2009, a beautiful mural created by local Aboriginal artist Adam Hill graced the outside of our centre until its redevelopment. After the new building was completed in 2015, the mural was moved to the playground and plans began to find an artist for a new work in the reception area.

When Plumtree’s CEO Sylvana Mahmic saw a painting by Jordan Ardler on a community bus at La Perouse, she was instantly attracted by its child and family-friendly style. The young Aboriginal artist was awarded a scholarship at the College of Fine Art (now UNSW Art & Design) in 2013 and received the Nura Gili Indigenous Spirit Award at the school two years later. Sylvana contacted Jordan through Instagram about creating a work for Plumtree; she responded enthusiastically and met with Sylvana and other staff in June 2015.

Ideas discussed for the work included elements such as circles, waves and a totem or animal-based design that children can relate to. Totems are an important element in Aboriginal art that connects people to the land and to the past. Jordan also consulted with local Aboriginal elders to discuss ideas and ensure that the artwork was appropriate. A concept centred on a whale totem eventually led to a broader ocean theme; the artist also wrote a story that reflects Plumtree and the warmth it provides.

Titled Build a Ripple Effect, the painting expresses the importance of forging relationships to create a better world and taking guidance from past generations to transcend barriers. The three-panel work was installed in April 2016.

Our work with Indigenous communities attracted a ten thousand dollar grant from the Maybanke Fund through the Sydney Community Foundation in 2015. The successful project resulted in a further donation of the same amount from anonymous philanthropists via Ngroo Education Inc., an organisation that promotes Indigenous participation in Early Childhood Education and Care and other services.

Plumtree’s Indigenous projects include the Walking Together: Connecting with Aboriginal Elders program, which educates staff about working with Aboriginal families and building stronger links with local Aboriginal communities. The project aims to improve the opportunity for Aboriginal children to achieve their potential by promoting Access, Attendance and Achievement. 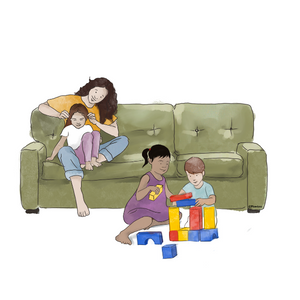